Celiac disease is a condition that causes the body to react negatively when it comes into contact with gluten. Symptoms range from indigestion and stomach pains to more severe symptoms like mood changes, anemia, seizures, infertility, and even cancer. It’s estimated that celiacs make up 1 out of every 133 people in North America and about 2% of all Europeans. These numbers are still on the rise due to increased awareness and better testing methods for celiac disease.

That being said, there are many interesting facts about celiac disease that people don’t know of or understand. In this blog post, we will share with you 50+ of these facts!

Fact #01: Celiac disease is an autoimmune disorder. It causes the immune system to react negatively when it comes into contact with gluten, which damages the small intestine and prevents absorption of nutrients from food items like bread, cereals, pasta, oats, etcetera.

Fact #02: Celiac Disease affects 1 in 133 people in North America as well as about two percent of Europeans.

Fact #03: Nearly everyone diagnosed with celiac disease must keep a strict gluten-free diet for life. This means that they can’t consume any foods or products containing wheat (including bread, cereals, pasta, and oatmeal), rye, and barley.

Luckily there are great options in today’s market. One of those options is gluten-free jumbo shells. Follow the link to that article that I’ve written, where I explain everything there is to know about jumbo shells, where to buy them, and I even included links to my favorite recipes.

Fact #04: In many people with celiac disease, a gluten-free diet successfully reduces or eliminates digestive problems and periods of feeling ill.

Fact #07: Celiac Disease is a chronic, autoimmune disorder that damages the lining of your small intestine and prevents absorption of nutrients from food.

Fact #08: 80% of Americans with celiac disease are undiagnosed.

Fact #09: Celiac Disease is not the same thing as gluten intolerance or wheat allergy.

Fact #10: Certain people with celiac disease will have a skin rash called dermatitis herpetiformis (DH). This rash, which usually appears on elbows and knees.

Fact #11: People with a first-degree relative with celiac disease have a 1 in 10 chance to have the condition.

Fact #12: Celiac Disease is not an allergy, which explains why it takes so long for a diagnosis.

Fact #13: Celiac disease can affect every organ of the body.

Fact #14: Celiac disease can occur at any age, though it is most common in people between 30 and 60 years old when diagnosed for the first time.

Fact #15: Approximately 20% of people with celiac disease also have another autoimmune disorder (such as rheumatoid arthritis, Type I diabetes, or thyroiditis).

Fact #16: There are over 300 known symptoms linked to celiac disease.

Fact #17: Celiac disease is caused by a reaction to gluten, not a virus or bacteria.

Fact #18: Approximately 20% of people diagnosed with celiac disease are asymptomatic, though still at risk for long-term complications.

Fact #19: The later people are diagnosed with celiac disease, the greater the chance of complications.

Fact #20: Celiac disease can cause a variety of skin conditions, including eczema and psoriasis.

Fact #21: The diagnose of celiac disease has two steps: a blood test and an endoscopy.

Fact #22: People with celiac disease may also have lactose and/or fructose intolerance. It is recommended patients test for these two conditions as well.

Fact #23: When people are diagnosed with celiac disease are likely to have fiber, iron, calcium, magnesium, zinc, folate, niacin, riboflavin, vitamin b12, and vitamin D deficiencies.

Fact #24: Products labeled as “Gluten-free” are not allowed to contain more than 20 parts per million of gluten, which is the safe threshold for celiacs to consume.

Fact #25: Celiac disease can affect women and men of all ages and races, but affects more women than men.

Fact #26: Over a four-year period, undiagnosed celiacs cost an average of $4,000 more than healthy individuals.

Fact #27: Celiac disease is the only autoimmune disease with a known trigger – Gluten.

Fact #28: In college, 60% of celiac students report getting sick from dining on campus, and 42% have missed classes because of exposure to gluten.

Fact #29: 50% of children with celiac disease suffer from anxiety.

Fact #30: 37% of celiac women have symptoms of depression.

Fact #32: Women with celiac disease are significantly more likely to miscarry or give birth prematurely than other women.

Fact #34: Celiac disease is more common in people with certain chromosomal disorders such as Down Syndrom, Turner Syndrome, and Williams Syndrome.

Fact #35: Back in the early 1900’s celiac disease was thought to be a nutritional disorder cured by eating bananas, milk, cottage cheese, meat, and vegetables – today, we know how far off we were back then from the truth.

Fact #36: According to research published by the American Journal of Gastroenterology, it takes 4 years for a person with celiac disease symptoms to be diagnosed formally.

Fact #37: Although Celiac disease is one of the most common gastrointestinal disorders, it receives the least public and private funding.

Fact #38: You can have the celiac disease gene, but never get diagnosed in your life.

Fact #39: The use of makeup that is not gluten-free may trigger celiac disease symptoms.

Fact #40: It is believed that the 1st Century Greek physician named Aretaeus of Cappadocia was the first to describe celiac disease symptoms in writing. Aretaeus called the disease Koiliakos after the greek word Koelia for the abdomen. He referred to people with this disease as coeliacs.

Fact #45: Millions around the world have pursued gluten-free diets whether they have been diagnosed with celiac disease or not. The gluten-free market is a billion-dollar market.

Fact #46: The average age at which individuals are diagnosed with celiac disease is 45 years for age.

Fact #49: Celiac disease can cause stunted growth in children.

Fact #50: Celiac disease has increased almost 10% per year over the past 60 years worldwide. These numbers are still on the rise due to increased awareness and better testing methods for celiac disease.

Celiac Disease is an autoimmune disorder that causes the body to attack itself if gluten, a protein found in wheat and other grains, is present. As we’ve learned from this long list of facts, celiac disease leads to inflammation of the small intestine and can lead to chronic diarrhea, weight loss, fatigue, mouth ulcers, stomach pain, and hundreds of other symptoms.

There are three different types of celiac disease based on how it presents – classic (the most common), latent (which may not have any symptoms), or silent (no signs).

Don’t downplay celiac disease. If you suspect you might have celiac disease be sure to get tested even if your symptoms don’t show up initially as they can sometimes come later down the line.

How do you get tested? Your Doctor can order a gene test for you or on your own through enterolab.com (out of pocket cost).

If this was helpful, please share this (tweet it, Facebook it, pin it, print it out, and frame it- haha!) with your family and friends- help me spread awareness and the gluten-free LOVE!

This list of facts is a result of research done on the following websites:

I am Betty Lewis, the Celiac Diva. I've been living a healthy Gluten-free life since 2000. I am happy wife and loving mother to two beautiful children, and yes we all live a gluten-free lifestyle. I love writing, fashion, cooking and eating healthy.

link to Are Oreos Gluten-free?

When I was a kid, we didn't have Oreos at home as most people did. My parents were just not fans. But I had many vegan friends, and Oreos are their go-to sweet snack. I remember the first time I...

Breakfast is an essential part of the day, and eating a high-protein breakfast can help you lose weight, keep you full longer,  help with sugar crashes, and boost your energy levels. High...

About The Celiac Diva

Gluten-free products have begun their takeover, and there’s no stopping this healthy alternative to gluten-based products. Since 2010, The Celiac Diva has helped celiacs and those that are gluten intolerant. As an independent blog we review, suggest and report the best products and news to those who follow a Gluten-free lifestyle.

Some recommended products may use affiliate links. TheCeliacDiva.com is a participant in the Amazon Services LLC Associates Program, an affiliate advertising program designed to provide a means for sites to earn advertising fees by advertising and linking to Amazon.com. Amazon and the Amazon logo are trademarks of Amazon.com, Inc or its affiliates.

I’ve been buying from the GlutenFreeMall.com since 2005. They have a great variety of gluten-free products that you can’t usually find elsewhere. I highly recommend them.” 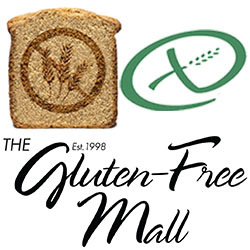